The foundation and building of CEDR

CEDR was founded in 1990 with the support of the Confederation of British Industry (CBI) and leading law firms and business and public sector organisations. Today CEDR is a leading independent Alternative Dispute Resolution Centre and the largest conflict management and resolution consultancy in the world.

Eileen and Karl would like to thank many others who helped establish CEDR as the world-class ADR Centre it is today, including, CEDR’s first Members and the original members of the Founding Steering Committee, as well as past and current CEDR Directors, Staff and our Trustees. 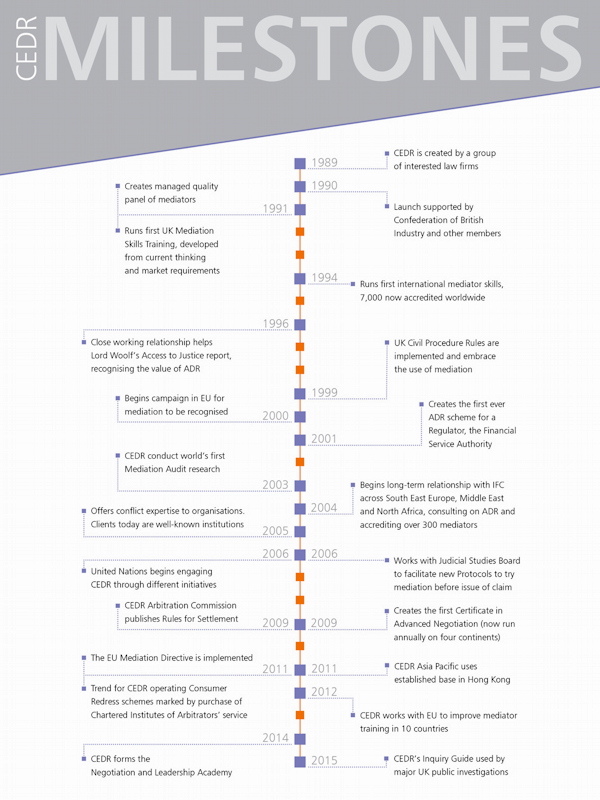 An extract from Women in the Law, edited by Elizabeth Cruickshank, Published by the Law Society, 2003

By the end of the 1980s [Eileen] had seen too many situations where she felt clients were not getting the best deal because "not enough effort was being put into negotiation. Where it did occur it was at the door of the court where time pressure was paramount". She was aware that a culture of mediation was developing in North California particularly in the intellectual property area. Her proposal was that she should investigate how mediation was being used in the American legal context and whether the American experience could be translated into a UK legal environment. She found herself "very impressed. I was so amazed to find mediation working so well in the context of the American legal system, and how effective the mediation process was, because it is in American lawyers' blood to be so much more adversarial than we are, probably because of the high rewards of litigation".

In the courts of California and New York she was able to see the mediation process in action. The Americans had dubbed this alternative dispute resolution (ADR) because it was an 'alternative' to litigation, "and I was amazed to see people going into it unwillingly because forced by order of the courts and coming out satisfied. I began to form the idea that I could write a book called The Resolution of Legal Disputes for use in the UK".

Fate sometimes takes a hand in unexpected ways. "I have learned that often bad or difficult experiences can be productive if you survive them and learn from them." Eileen decided that instead of returning directly from San Francisco to London she would combine work and travel by visiting Australia and Singapore. Unfortunately she fell off a racehorse during "a pretty wild ride with some three day eventers" in the Australian outback and although she pretended to herself that the accident was unimportant she ended up in traction in a Singapore hospital and in recovery for several months. This gave her ample time to reflect and to reassess her goals.

Merely writing a book would not in itself be sufficient to realise her vision. What was needed, she decided, was a 'neutral non-TKB (Eileen’s law firm) product', which would facilitate mediation. She also thought that the term alternative dispute resolution was insufficiently dynamic but decided that for the time they would need to keep it. What she wanted was 'effective' dispute resolution, or EDR. TKB as it turned out were very supportive of the youngest partner on their management committee "probably because I was a major fee earner", and with the help of the firm's librarian she compiled a database of City lawyers and academics who might be interested. There were a number of raised eyebrows and looks of incredulity from some City lawyers. Today a number play an active part in the mediation community. Her greatest discovery was Dr Karl Mackie who was teaching negotiation to business in Nottingham University. They forged a dynamic working relationship beginning with a shared dinner with the Lord Chancellor, Lord Mackay of Clashfern at an American Bar Conference in Hawaii. Today Eileen works alongside Karl Mackie at the Centre for Effective Dispute Resolution (CEDR) and they married a few years ago.

Eileen was not looking for mere acceptance of an idea which was new to the UK legal world. She felt that the concept could not work unless there was provision for the training of lawyers and others as mediators, and this required funding. Having sought advice from some of the best mediation trainers in America on the presentation of her ideas and the quantum of funding required, she was able to bring the idea of ADR to a wider audience. The small £12,000 initial funding gathered from two firms of accountants, six law firms and four companies just about paid for a dedicated telephone line and 13 stationery, but she had been so persuasive in her personal marketing that CEDR's launch in 1989 at the CBI was attended by 300 people. Being on the platform with John Banham, Sir Alex Jarratt and Karl Mackie, with her father, her sister and partners in the audience was one of her proudest professional moments.

Soon afterwards difficulties at TKB led to the dissolution of the partnership and Eileen found herself with a young baby and no legal base from which to operate just at the time when her ideas were coming to fruition. This was not an easy period in her life, but Eileen would not wish to make too much of the difficulty. She moved to Howard Kennedy to run their international group before she was "enticed to join CEDR on a permanent basis. I had only wanted to set up CEDR, I had not intended to become a mediator myself, that was not on my personal agenda". But she realised that it was with CEDR that her future undoubtedly lay and with her parents' help in looking after her daughter, she survived and flourished with her new organisation.

CEDR itself is a charity with a money-earning arm, which facilitates the mediation process. The role of a good mediator is to "get the best interaction out of two groups of people with a lot at stake, and to facilitate dialogue between them to get the best outcome. This means that you need to control the information flow between the parties, you need to know when to keep them apart and when to bring them together. They need to know that you are acting for everyone and not just for one party, because you want to find with them a resolution that everyone finds acceptable".

This clearly requires a great deal of skill, and two key elements in the equation are the commitment of the mediator and also the mediator's credibility with the parties in dispute. "If the mediator was not there it's very unlikely that the parties would stay in the same building working things out for six to 10 hours. They need to feel committed to being there and they constantly need the reassurance of the mediator that even if things are going very slowly the process is moving forward. The process in itself creates a discipline for people to stick at what is extremely difficult. It may be the first time that the commercial people in the opposing parties find themselves together, able to put their cards on the table and to say what they really want rather than communicating through their lawyers. So it is essential that there should be people present from both sides who are able to take decisions."

CEDR [at the time of publication - 2003] was housed on an open plan sixth floor of a tall building in Docklands and designed with mediation in mind. Staff specialists, who come from many different backgrounds, architecture, accountancy, academia as well as the Health Service, work desk to desk with the caseworkers who organise training and assess matters presented to CEDR. Meeting rooms are placed on the periphery of the floor strategically not adjacent to each other. The offices of the Chief Executive and the Deputy Chief Executive are small privacy pods for managing the firm, not grandiose power statements, and reflect Eileen's description of a good mediator, who needs to be "patient, but intelligently, not annoyingly persistent. Because sometimes the mediation does not effect a settlement on the day, the mediator needs to be able to enable the parties to continue their communication. Sometimes this is done on the phone and sometimes they need to come back into the building. If the mediation is not going to be final on that day people need to leave in a good frame of mind, sufficiently positive and optimistic that they think that a resolution will come".

She finds her work "immensely rewarding". The Woolf reforms and the introduction of the Civil Procedure Rules (SI 1998/3132) put "mediation squarely on the agenda as far as the civil justice system is concerned. And proportionality became important in terms of the law courts system. We need to realise that now clients and lawyers have obligations to ensure that their use of the courts is proportional to the dispute involved".

"But I'm fundamentally still a lawyer at heart. I'm not into lawyer bashing. What I enjoy as a mediator is assisting people to get to a solution from the legal and commercial perspective working with good lawyers." On the other hand she "has no regrets about giving up the law". Although it is clearly exciting for her to see where she "has arrived in life having been involved in pioneering work for mediation in England and Wales, taking on responsibility for a large number of people and helping to produce a new environment" she is much more interested in looking forward, to where CEDR can go next.

All of Eileen’s work is managed through CEDR Chambers (Centre for Effective Dispute Resolution). To enquire about Eileen’s availability or to book her for a mediation call the Commercial Team on +44 (0)20 7536 6060 or email adr@cedr.com. To contact Eileen directly, ecarroll@cedr.com M +44 (0)7958 523024.